STATEMENT: The spokesperson of the Press and Quick Reaction Unit (PRU) of the Office of the Council of Ministers (OCM) of the Royal Government of Cambodia

The spokesperson of the Press and Quick Reaction Unit (PRU) of the Office of the Council of Ministers (OCM) of the Royal Government of Cambodia is dismayed at the statement of Thai Foreign Ministry Spokesman Thani Thongpakdee saying that “the ministry had ascertained that Mr. Panich and his group unknowingly trespassed into Cambodian territory while investigating Thai villagers’ complaints about land ownership,” as written under Kom Chad Luek Editorial, published 6 January 2011 in Bangkok Post Newspaper section.
Whether or not Kom Chad Luek Editorial fabricated the news or distorted what Mr. Thani Thongpakdee had said, it is the obligation of Mr. Thani Thongpakdee to set the record straight.
Otherwise, and in the absence of any protest by Mr. Thani Thongpakdee to the contrary, the Spokesperson of the PRU demands that Mr. Thani Thongpakdee retracts this inflammatory statement aimed at rallying the Thai public opinion to blame Cambodians for having arrested 7 Thai trespassers, sewing mistrust between Thais and Cambodians living along the international boundary line, and fanning the flames of Thai hatred towards Cambodian, and possibly trying to influence the outcome of the trial and reaping personal political gains.
The fact of the matters was that Mr. Panich Vikitsreth and his group trespassed into Cambodian territory. This is illegal and must be prosecuted to the full extend of the law for the following reasons:
Mr. Panich and his group are not illiterate people who do not know this universal law; they are not just peasants who strayed from time to time into the territory of the other country, because there is no barbed-wire along the international border between Cambodia and Thailand.
They came to the border area; they passed Thai border police check-point (maybe because they are VIP’s from Bangkok or maybe they represented the power from Bangkok that is far superior than the rules and the duties of Thai border police check- point patrol); and they trespassed into Cambodian territory.
Mr. Panich was talking on a mobile phone, saying he is ‘‘inside Cambodia,’’ before he was arrested with his group, and therefore when Mr. Thani Thongpakdee said “Mr. Panich and his group unknowingly trespassed into Cambodian territory,” this is too big a lie, a cheap manipulation of the fact, and an attempt to cover up the truth.
They trespassed with intentions, one of which could have been what Mr. Panich had told Prime Minister Abhisit Vijjajeva. What are the others? They could be ill-intentions for the following reasons:
Mr. Panich told Mr. Abhisit that he would go to Prachin Buri; instead he went to Sa Kaev.
He told Mr. Abhisit that he would go with Mr Samdin [Lertbutr, a PAD activist]. Instead
he went with Mr Veera Somkwamkid.
The spokesperson of the PRU wishes to remind Mr. Thani Thongpakdee that Foreign Minister Kasit Pyromya has told reporters that "The Foreign Ministry has an obligation to maintain good relations, not to make trouble and spoil the relationship," and he added: "I beg all parties not to create any misunderstanding between the two countries."
The spokesperson of the PRU, under this circumstance, found to be not necessary to stress the importance of the relationship between the government and the people of Cambodia and Thailand. Foreign Minister Kasit Pyromya has said it all in two sentences. Now let the due process of law under the judicial system of Cambodia takes its own course.
Phnom Penh
January 2011
The Spokesperson of the Pres and Quick Reaction Unit
រៀបចំ IDS Khmer ម 1:28 PM No comments:
Email ThisBlogThis!Share to TwitterShare to FacebookShare to Pinterest 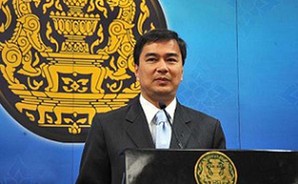