Once again, Thailand is gearing itself to wage war on Cambodia following the statement made by Thai Prime Minister Abhisit Vejjajiva quoted by the Nation entitled "Phnom Penh must remove flag"  and other media on 27 January 2011 saying that "Cambodia had no right to rise its national flag over the disputed border area adjacent to the Preah Vihear Temple.
Such a statement made by the Prime Minister of Thailand constitutes a casus belli to declare a war of aggression against Cambodia. The Thai Government has no right to use military force against the sovereignty of any country. The location on which  Prime Minister Abhisit demanded the Cambodian Government to remove its national flag is clearly identified as  Wat Keo Sikkha Kiri Svara where Thai troops had already initiated one invasion on 15 July 2008.
As far as the Cambodian-Thai relation is concerned, it is crystal clear that the national and international public opinion is fully aware that the two countries share a clear borderline based on the ANNEX 1 Dangrek Map 1/200000 which was produced in 1908 in full conformity with the 1904 Convention and 1907 Treaty. As it turned out, there is absolutely neither disputed nor overlapping area. On the contrary,  the provocative act by Thailand to draw up a secret and unilateral map which lacks  international legitimacy is aimed only at serving its ambition to invade Cambodia and take soverign Cambodian territory or rather, to forcibly annex Cambodian soil by military means in a foolish and suicidal  attempt to succeed by force where it has already failed by international judiciary means.
On 28 January 2011, the Ministry of Foreign Affairs and International Cooperation of Cambodia issued a declaration by quoting the Judgement of the International Court of Justice in The Hague dated 15 June 1962. It  stated that:
1. "... the Temple of Preah Vihear is situated in territory under the sovereignty of Cambodia,"
2. "Thailand is under an obligation to withdraw any military or police forces, or other guards or keepers, stationed by her at the Temple, or in its vicinity on Cambodian territory,".
The said-statement also reaffirmed  Article 1(c) of the Memorandum of Understanding between the Government of the Kingdom of Cambodia and the Government of the Kingdom of Thailand on the Survey and Demarcation on Land Boundary, signed on 14 June 2000, which incidentally, also recognizes the above mentioned map as a legal basis for the survey and demarcation of the Land Boundary between the Kingdom of Cambodia and Kingdom of Thailand.
According to the Map produced by the Franco-Siamese Commissions, the Keo Sikha Kiri Svara Pagoda, built by the people of Cambodia in 1998, is clearly situated in the Cambodian territory. Therefore, the national flag of the Kingdom of Cambodia is legitimately flying over this pagoda.
On the other hand, the declaration of the Cambodian Ministry of Foreign Affairs stressed that the Thai Prime Minister's  statement is in parallel with Thailand's millitary excercise at the border with Cambodia is clearly provocative and constitutes a casus belli for future acts of aggression against Cambodia and such a statement and insulting demand are unacceptable and firmly rejected by the latter.
Strong with the internationally recognized legal documents coupled with the territory under the effective sovereignty of  Cambodia forms a solid and legitimate foundation for Cambodia that absolutely cannot be violated by Thailand. On top of that, the Royal Government of Cambodia has time and again clearly stated her principle position to use her self-defence rights as enshrined in the articles 52 and 53 of the Cambodian Constitution so as to protect the national sovereignty and territorial integrity.
However, it is also important  to take note that the Royal Government of Cambodia has been undeviatingly sticking to peaceful means through existing  mechanisms to settle the border issues between the two countries. Therefore, the warning to recourse to military force against Cambodia undoubtedly reflects the ill-will of Bangkok Governemnt to use Cambodia as hostage of Thai internal politics at a time when both the yellow and red shirt protestors are massively rallying against the government before the general elections to be held this year.
This is clearly a well thought out political strategy by elements within  the ruling Democratic Party to beat the drums of war, and drive the wild sentiments of patriotism and nationalism to divert its people’s attention from its domestic political crisis brought about by the multi-colored agent provocateurs and militant activists.
The following acts have clearly demonstrated the ill will of the ignorant Thais, fueled by  the yellow shirts and their affiliates as they are all doing this with an agenda – that to invade Cambodia with blind nationalism and in the course,  retain political power in Bangkok!
Cambodia, in good faith and to avoid unnecessary tensions, had earlier removed two stone tablets at Wat Keo Sekha Kirisvara, which indicated that the area belonged to Cambodia and had been invaded by Thai troops in 2008.
It certainly does not send the signal for Thailand and its recalcitrant Prime Minister to take this as an act of weakness and up the ante by demanding Cambodia to take down its flag in its own territory. This is tantamount to Cambodia telling Thailand to remove the Thai flag from the border post at the Thai side of the border! Violence begets violence.
This is illogical, defying internationally accepted norms, bilateral and multi-lateral relations and is downright stupidity of the highest order on the part of the Thais!
(by T. Mohan, a long term political analyst in Cambodia)
រៀបចំ IDS Khmer ម 5:02 PM No comments:
Email ThisBlogThis!Share to TwitterShare to FacebookShare to Pinterest

The relations between the Kingdom of Cambodia and the kingdom of Thailand must be based on the respect of the agreements signed by the representatives of the parties to the agreements. In 1904 and 1907, while Cambodia was under French protectorate, the agreements between France and Siam, namely the 1904 Convention and the 1907 Treaty in particular are binding under the international rule of law. In 2000, an MOU on the demarcation of land boundary was signed between Cambodia and Thailand, two sovereign nations, members of ASEAN, and members of the United Nations. The 2000 MOU is binding.
If all Thai politicians including Prime Minister Ahbisit Vejjajiva lead the Thai government with international dignity, by abiding themselves to the contents and spirits of all international agreements that exist and well in force, the relation between Cambodia and Thailand would be always a promising one for the development and peaceful interaction between Cambodians and Thais who live on both sides of the common border between the two nations, and between the two governments. But some Thai politicians including Abhisit Vejjajiva are traditionally nationalists or extreme nationalists with regard to the territorial ambition against Cambodia.  This type of behavior is the cause of the conflicts and sometimes military clashes between the two nations. On July 15, 2008 Thai troops invaded Cambodia, occupied the territory in the vicinity of the Temple of Preah Vihear, including Keo Sikkha Kiri Svara pagoda. On 15 July 2008, Thai troops attacked Cambodian positions at Veal Intry, Phnom Trap and the Keo Sikkha Kiri Svara pagoda. On April 2009, Thai troops using heavy weapons attacked and burnt to the ground the market village situated next to the Northern staircase of the Temple of Preah Vihear causing unprecedented devastation to 319 Cambodian families, and damaging parts of the Temple of Preah Vihear.
The position of the Kingdom of Cambodia has been always clear and unequivocal that between Cambodia and Thailand there is a final and stable international boundary line delimited by the mixed commission composed of French and Siam officers, established under the provisions of the 1904 Convention, agreed and signed by France and Siam, recognized by France and Siam, and known to be such by world powers, many countries, and many maps publication societies at that time. Therefore, there is absolutely no “overlapping area or disputed area in the vicinity of the Temple of Preah Vihear, based on the “Dangrek Map,” known also as the ANNEX I map in the International Court of Justice (ICJ) judgments dated 15 June 1962. To that effect, Cambodia can exercise and express her sovereignty under any shape and form as she pleases on all the territory of the Kingdom of Cambodia, and especially on the Cambodian side of the boundary line drawn on the Dangrek Map or the ANNEX I map.
It is an insulting statement made by the Prime Minister of the Kingdom of Thailand, Abhisit Vejjajiva when he said, as reported by the Nation on 28 January, “If there is such flag (risen at the Keo Sikkha Kiri Svara pagoda), it needs to be taken down.” Abhisit Vejjajiva must retract this unacceptable statement, as this pagoda is about 300 meters west of the Temple of Preah Vihear, and about 700 meters from the boundary line inside Cambodia.
It has become customary in the relations between Cambodia and Thailand, that when Thailand falls into factional confrontation and internal squabbling between the government, the “yellow shirts” the Networks of Thai Patriots, the Santi Asoka Sect, or the “Red Shirts” the only thing that they can think of is to take Cambodia as hostage. Prime Minister Abhisit Vejjajiva is doing the same thing when he made such an insulting and unacceptable statement which not only constitutes a clear provocative act, but also a casus belli for future aggression against Cambodia.
Waddhana P
Senior Analyst and Researcher on
Cambodian-Thai Relations
Institute for Internaitonal Affairs, Cambodia
28 January 2011
រៀបចំ IDS Khmer ម 4:32 PM No comments:
Email ThisBlogThis!Share to TwitterShare to FacebookShare to Pinterest 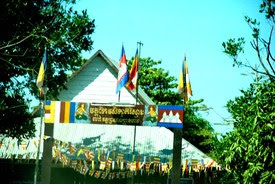 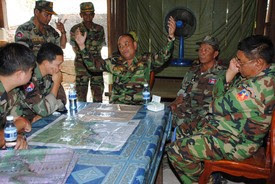 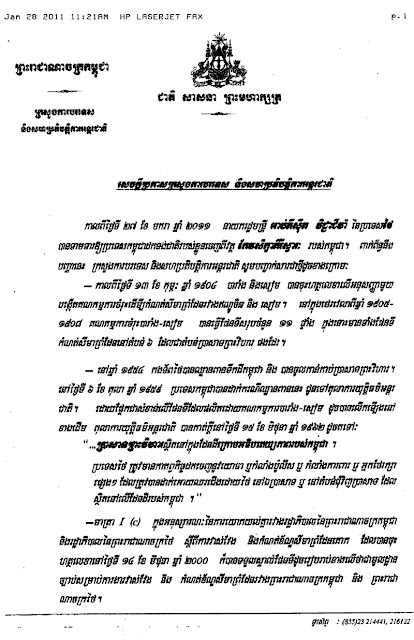 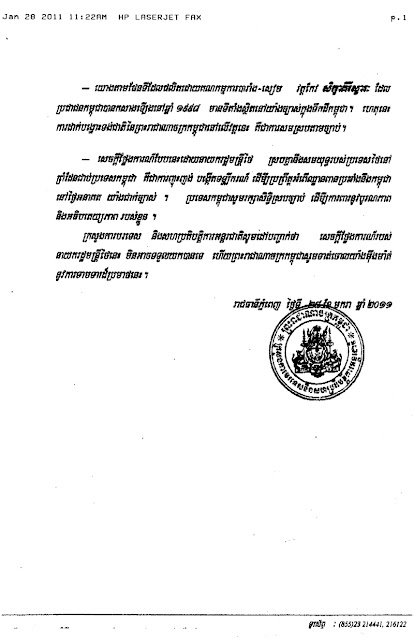 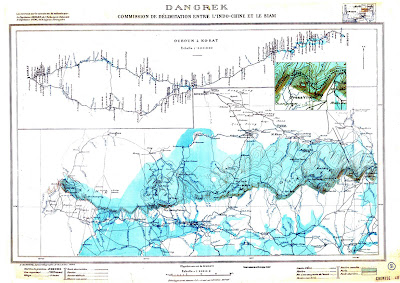 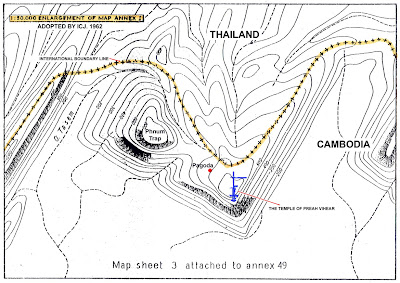 January 2011, Prime Minister Abisit Vejjajiva of Thailand demanded that Cambodia must remove its flag from th KEO SIKA KIRISVARA pagoda of Cambodia. In this regard, the Ministry of Foreign Affairs and International Cooperation wishes to reassert as follows: 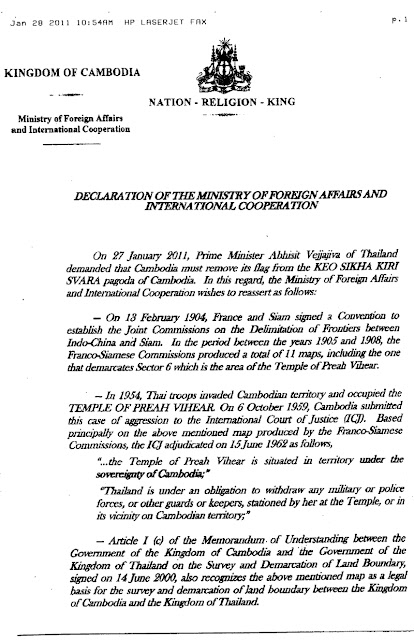 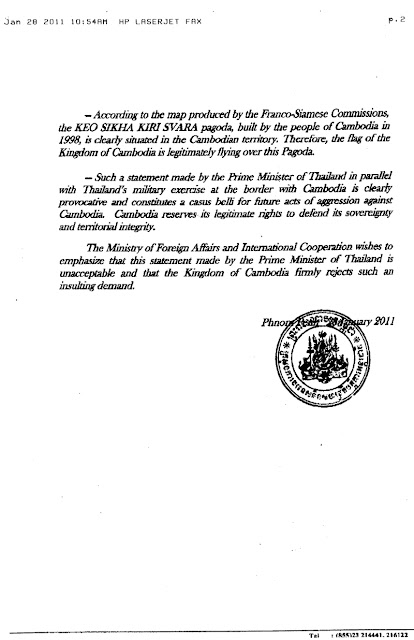 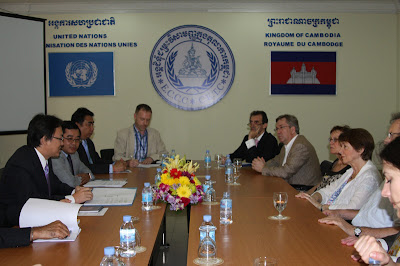 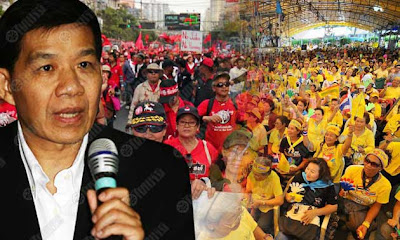