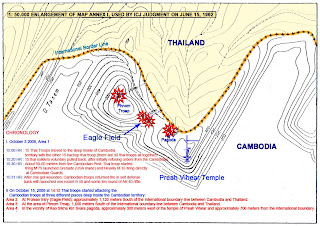 The Admission of Guilt

October 22, 2008
Finally, Thailand has admitted that Thailand has been the cause for the delays of talks between Cambodia and Thailand to resolve the disputes between the two countries along the border. Whether they were intentionally or not, they were deceitful, despicable. The display of arrogance is obvious.
Sovan Chanratana was absolutely correct when he suggested that Mr. Virachai Plasai pretended to be ignorant about international laws and international map. Actually he buried his head in the sand of Thai "UNILATERAL MAP".
Come to think of it, Thailand and Mr. Virachai Plasai have probably thought that the glorious historical time for Thailand must be under the era of Nazism and Fascism when Thailand took possession of the Northwest provinces of Cambodia, including Preah Vihear under the 1941 Treaty. The saying holds true that old habits are hard to shake off. That is why Thailand drew the UNILATERAL MAP no different from the Nazis and the Fascists who drew unilateral maps of Germany and Italy to include areas belonged to other countries of Europe and then launched the invasion and occupation.
Mr. Virachai Plasai and Thailand need to shake off the old habits for the sake of good neighbourlyness and peace for Thais as well as for Khmers.
Pancha Seila
"The cabinet appointed Vasin Teeravejayarn the Thai chairman of the Joint Boundary Commission to demarcate the land border with Cambodia. He was nominated by Foreign Minister Sompong Amornvivat.
Government spokesman Nattawut Saikua said Mr Vasin is a former ambassador to South Korea and former director-general of the Treaties and Legal Affairs Department. He will take up the post on Nov 10.
Meetings have not been scheduled because the government wants parliament to approve the talks for fear of breaching the charter."
http://www.bangkokpost.com/topstories/topstories.php?id=131552
រៀបចំ IDS Khmer ម 12:20 PM No comments:
Email ThisBlogThis!Share to TwitterShare to FacebookShare to Pinterest
Newer Posts Older Posts Home
Subscribe to: Posts (Atom)