1970: Prince Sihanouk ousted and Lon No1 takes over; begins fighting the communists with support
1973: Congress ends military assistance to 1975: The Khmer Rouge takes ; U.s. Embassy staff evacuated
1975-1979: Up to two million Cambodians die under the Khmer Rouge
1979: invades and topples Pol Pot
Prince Sihanouk's efforts throughout the previous decade to keep out of the war in and walk a tightrope between superpowers had failed. In March 1970, while he vacationed in , the National Assembly voted unanimously to withdraw its confidence from Prince Sihanouk.
Lon Nol would become the new head of state and oversee the drafting of a new constitution. In October 1970, he proclaimed the , with the removal of Vietnamese Communists from Cambodian lands at the center of its agenda.
The Prince and the communist powers-the governments of North Vietnam, the Soviet Union and China-claimed that the CIA was behind the coup, while President Nixon and Henry Kissinger, then National Security Advisor, expressed surprise at the take-over, stating the United States was in no way involved. Many scholars now believe that the knew that Sihanouk might be overthrown, but whether or not it had a hand in the coup has never been certain. The exiled Prince would go on to form a government in called the Gouvernement Royal d'Union Nationale de Kampuchea, or GRUNK, while encouraging Cambodians to join the rising Khmer Rouge party.
The military had become increasingly suspicious of the Prince and viewed him as an obstacle to its objectives in . The trafficking of weapons and supplies for Vietnamese communists through the Cambodian had long been an issue of concern, as were Sihanouk's overtures to the North Vietnamese. Given these issues, the new regime in was viewed as a positive change in the recently re-established diplomatic relations between the and . The was quick to recognize and back Lon Nol's government.
Initially, the U.S. Embassy staff remained small, with the primary task of resuming dialogue with ; it was composed of Charge d' Affaires Lloyd M. Rives, a military attache, an administrative officer, a political officer, two secretaries, and a communicator. On September 15, 1970, Ambassador Emory C. Swank presented his credentials in . He would remain in the post for three years.
The and now shared the same goal: to get communist Vietnamese troops out of . To this end, Lon Nol entered into an entente with the South Vietnamese, ending 's long-time position of neutrality. In doing so, officially began to fight the communists.
But Lon Nol would not be the strong military leader needed. Within the first few months of his rule, his Force Armee National Khmere, or FANK, would suffer major casualties and setbacks, desperately looking on as more than half of fell to the North Vietnamese army.
On April 30, 1970, President Nixon informed a shocked American public that and South Vietnamese troops were entering in order to defeat the over 40,000 Viet Cong and North Vietnamese soldiers that had amassed in the east of the country. Few people outside of the President's circle knew about the plan, including Secretary of State William P. Rogers, who only five days earlier had testified to the U.S. Senate Committee on Foreign Relations that the had no intention of intervening in .
The strategy, known as the Cambodia Campaign or Cambodia Incursion, had several aims: to upset the supply system to the Vietnamese communists, relieve pressure on and South Vietnamese soldiers in , facilitate the imminent withdrawal of troops from , and help rid of the communist threat. was no longer simply a sideshow in the Vietnam War; it was now part of it.
Nations around the world condemned the military action. At home, with the in the throes of the anti-war movement, Nixon's announcement ignited college campuses across the country. In one of the era's most infamous incidents, four student demonstrators were killed by the National Guard at on May 4.
The U.S. Congress had been kept in the dark on the Cambodia Incursion. Its Committee on Foreign Relations, with Senator William J. Fulbright taking the lead, demanded to know the legal basis for the troops being sent to . Fifty Senators voiced their opposition to the campaign; 21 supported it. Shortly thereafter, the Cooper-Church Amendment was introduced to the U.S. Senate, which included a stipulation that the official number of personnel in could never exceed 200 at any given time.
But the incursion did not have the intended results. Fleeing from the attacks, the Vietnamese communists retreated deeper into , bringing them within a few miles of . President Nixon did not lose resolve, taking the view that it was essential to policy that not fall to the communists. He was committed to preserving 's independence. To show his support, the President sent Vice President Spiro Agnew to . Nixon was also determined to increase military assistance to , seeking to increase aid from $8.9 million in 1970 to $40 million in 1971. A few months later, the President requested an additional $255 million for . Congress would grant $185 million; in total, the would provide $1.6 billion to the Lon Nol regime. Controversially, some of these funds were delivered without Congressional approval. 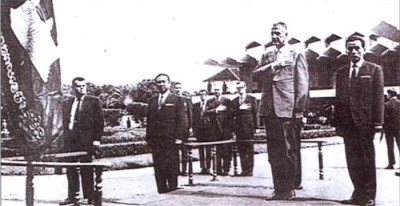 Vice President Spiro Agnew on his visit to in September in 1970.
The U.S. Embassy grew as military personnel arrived in and forces provided significant air power to assist the Cambodians. But both the Department of Defense and the Embassy feared for 's future. Lon Nol continued to be a weak leader, ineffectively managing the army and a government that seemed to be falling deeper and deeper into corruption and incompetence. The country needed a strong, central character that would win the war.
Meanwhile, the Khmer Rouge forces, or FUNK, were becoming an increasing threat as their ranks swelled with new recruits, who were both students and peasants. FUNK was bolstered by the return of some 5,000 young Cambodians who had been indoctrinated and trained by the Viet Minh in the 15 years following the wars for independence with , after the Vietnamese forces had withdrawn from . These now seasoned soldiers were ready to train Cambodians to join them.
The Embassy estimated that FUNK forces had grown to 15,000 by August 1971, while other accounts suggested the number might be as high as 50,000.
The August 1971 Chenla II campaign, whose main goal was to a regain control of a key transportation link, was the last offensive led by Lon Nol's FANK troops. The North Vietnamese and Viet Cong crushed the Cambodian army, killing 3,000 soldiers and sending some 15,000 demoralized troops in retreat.
The situation in continued to deteriorate. To consolidate his power, Lon Nol would become increasingly anti-democratic and begin violent crackdowns on student protests and labor strikes. When an election was called in the spring of 1972, the hoped that Lon Nol, who had recently suffered a stroke, would graciously bow out and a reform-minded group would assume power. Not only did Lon Nol run, but he won in an election that was widely believed to be rigged. Hope was fading fast for a resolution in .
The security situation in the country deteriorated rapidly and attacks increased, with members of Lon Nol's army defecting to the Khmer Rouge. American Foreign Service officers were forced to travel in heavily armoured vehicles. One incident saw a bomb detonated near Deputy Chief of Mission Thomas Enders's car; had he not been in a protected vehicle, the attack would have killed him. 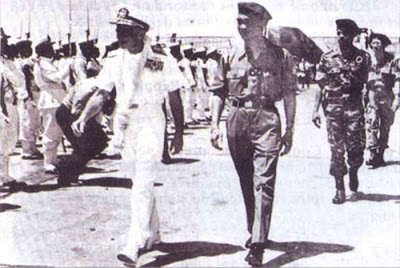 Admiral John S. McCain is welcomed by General Sisowath Sirik Matak upon arrival at the airport in 1971
The 1972 Easter Offensive in , during which the North Vietnamese launched a massive campaign against South Vietnamese and troops, represented a major turning point in the war in . Key Vietnamese units withdrew from to support the offensive. From this point forward, the Khmer Rouge became the leading force battling the Lon Nol government, though officials in would continue to believe that the insurgent troops were still backed by the Vietnamese. The conflict in had now become a civil war.

A State Department report prepared in January of 1973 stated that the Cambodian government now controlled as little as a quarter of the country, and Lon Nol's government had virtually no support. It went on to say that without trade, would be in complete economic ruin. Things had become so bad that even rice had to be imported into once-fertile .

The same month saw the signing of the Paris Peace Accords, which ended direct military involvement in . Fighting in stopped temporarily, and there was momentary hope that the conflict would end in . Though the accords reiterated 's independence and neutrality as defined by the 1954 Geneva Convention, no timetable was set for a ceasefire in . On the advice of the , which hoped to see an end to the wars in , Lon Nol called for a ceasefire. Meanwhile, Prince Sihanouk repeatedly tried to meet with Kissinger and discuss solutions for the failing Cambodian state. Kissinger mistrusted Sihanouk's intentions and questioned his ties to the Khmer Rouge, and no talks were ever arranged. 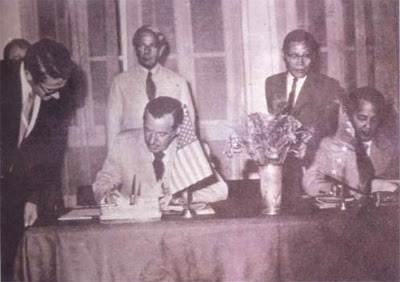 u.s. Ambassador Emory Swank signs an assistance agreement with Cambodian Prime Minister Long Boret in 1973, which will provide with 28,000 tons of rice.
រៀបចំ IDS Khmer ម 10:28 AM
Email ThisBlogThis!Share to TwitterShare to FacebookShare to Pinterest