The supports the development of 's garment industry
The assists in the restoration of key Angkorean temples, like Phnom Bakheng
2003 and 2008: Elections in
2003: Secretary of State Colin Powell visits
2006: Embassy opens in new building
2006: Former President Bill Clinton visits
2007: First Peace Corps volunteers in sworn in
2009: The Khmer Rouge tribunal begins its first case; the provides $16.8 million in support


Cambodia began the new millennium united and at peace for the first time in 30 years. The Khmer Rouge was defeated, the country was stable, and the government could begin working in earnest to address some of the country's biggest challenges, including widespread poverty, poor health and education systems, and the emergence of HIV / AIDS.
At the end of the 1990s, Cambodian Prime Minister Hun Sen was upbeat about the state of U.S.-Cambodian ties. "I feel we have a good relationship compared with the last two decades, in which we seemed to be enemies," he told Time magazine in March 1999. The Prime Minister's words would ring true over the course of the next 10 years, as the two countries further strengthened ties and worked together to tackle issues of mutual concern.
One such issue was how to deal with the surviving leaders of the Khmer Rouge. Although Pol Pot was dead, senior cadres such as Khieu Samphan and Ieng Sary were still alive and residing freely in the country, having been granted amnesty by the government in exchange for defecting. In 1997, Cambodia had formed a task force to create a court structure to try these leaders for their crimes, but the government needed international support to get the trial off the ground.
Through a series of negotiations involving the UN in which the United States played a leading role a trial structure was created in which Cambodian and international judges would together try senior leaders most responsible for violations of domestic and international law. In 2003, a framework agreement was
reached on creating the tribunal, which was dubbed the Extraordinary Chambers in the Courts of Cambodia.
In March 2006, UN Secretary General Kofi Annan nominated seven international judges to oversee the
court, and in May of that year Cambodian Minister of Justice Ang Vong Vathana announced that the government endorsed 30 Cambodian and UN judges who would make up the court. These judges were
sworn in in July 2006, but Cambodians would have to wait several years for the actual proceedings to begin.

Concerned that the court would be unable to uphold international standards, the United States did not begin funding the court until 2009. Still, U.S. assistance contributed to the tribunal's efforts in other important ways, including the establishment of a Cambodian-run NGO called the Documentation Center
of Cambodia.
Founded by Youk Chhang, a Cambodian survivor of the Khmer Rouge and expert on the regime, the center
is Cambodia's only independent, non-governmental institution devoted to documenting Khmer Rouge history. The center's staff collects evidence, conducts research and promotes accountability for crimes through public outreach. It has provided thousands of pages of evidence to the Khmer Rouge tribunal, including key documents from the regime's central leadership and the locations of mass graves. As negotiations to form the trial continued, the United States appointed Charles Aaron Ray as the new U.S. Ambassador to Cambodia. Ambassador Ray presented his credentials on January 4, 2003.
Ambassador Ray's first major concern was Cambodia's upcoming national election, which was scheduled to
take place on July 27, 2003. During campaigning, sporadic violence occurred, although it was much less frequent than in previous elections. On June 18, U.S. Secretary of State Colin Powell visited Cambodia and
met with leaders of the three leading political parties. 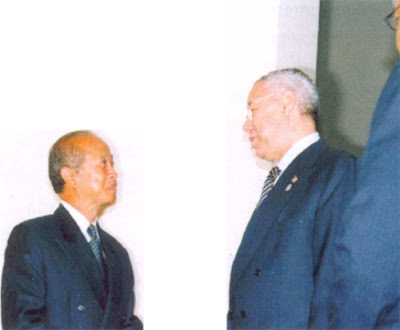 u.s.
Secretary of State Colin Powell meets with Prince Ranariddh.
Powell called for all parties to receive fair and equal coverage in the country's media. On Election Day, Prime Minister Hun Sen once again emerged victorious, claiming 73 of the 123 National Assembly seats. Ambassador Ray praised the election, saying it was a sign of "impressive growth of the democratic process in Cambodia." However, the CPP lacked the two-thirds majority necessary to form a government, and a political deadlock ensued. The impasse was resolved nearly a year later, when the CPP formed an alliance with FUNCINPEC, allowing the country to move forward.
With the political situation stable and a new government in place, the country could once again focus on development issues. Just as it had done in the 1950s, the United States was once again ready to playa prominent role. The U.S. Agency for International Development's budget quadrupled in size over the course of the decade, reaching a total expenditure of over $470 million between 2000· and 2009, helping to improve the health and education systems, stimulate economic growth, and promote human rights and civil liberties.
In an effort to stimulate economic growth, Cambodia had signed a bilateral trade agreement with the United States in 1999 that allowed it to export a quota of textiles to the U.S. market under favorable terms. In exchange, Cambodia committed to improving labor standards and allowing inspections of its factories. As a result of this deal- and due to Cambodia's growing reputation as a labor-friendly countrythe garment industry expanded rapidly throughout the 2000s. It eventually grew to employ 350,000 people, many of whom came from poor farming communities in rural provinces. As the country's largest export industry, the garment sector became an engine of economic growth, helping to double per-capita income over the course of the decade.
The growing economy allowed Cambodians to look to the future with optimism for the first time in years, but it also allowed the country to examine its past - in particular, the archeological wonders of the Angkorean era.
In 2003, Ambassador Ray signed an agreement with the Cambodian government to restrict imports of ancient artifacts into the U.S. market, in a bid to protect the looting   Former U.S. President Bill Clinton meets with Prime Minister Hun Sen during his visit to Cambodia in 2006. The United States also provided assistance to help restore some of Cambodia's most precious Angkorean temples. Beginning in 2001, and continuing throughout the decade, the United States provided over $1.8  million in historical preservation funds to Cambodia. Activities included inventorying historical objects, conducting research, and restoring temple sites; the most ambitious of these was the $1.5 million restoration of Phnom Bakheng, a major temple located within the Angkor complex.
U.S. assistance in the 2000s also helped Cambodia address the spread of HIV / AIDS, which had emerged as a health threat in the country and the region. As the largest bilateral donor ofHIV/AIDS funds in Cambodia, the United States helped cut the prevalence rate of the disease from 2% in the late 1990s to less than 1% in 2005, making Cambodia one of the few success stories in the global fight against the virus.
One American with a keen interest in the HIV/ AIDS  issue was former President Bill Clinton, whose international development organization, the Clinton Foundation, works to address health issues 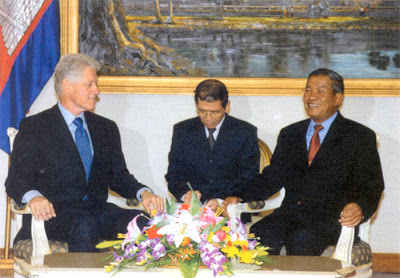 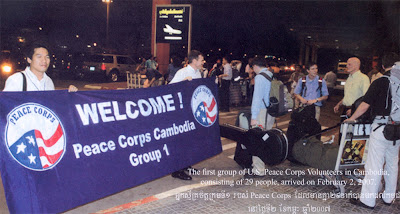 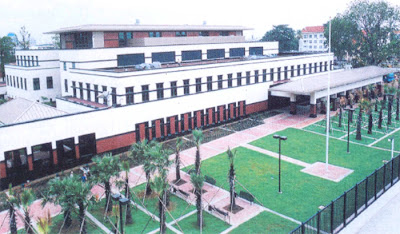 The new Embassy facility opened in 2006.
worldwide. In December 2006, the former President visited Phnom Penh and pledged the foundation's support in fighting the disease in Cambodia. He signed a memorandum of understanding with Prime Minister Hun Sen under which the Clinton Foundation would provide anti-retroviral medication and upgrade national health laboratories, among other activities. President Clinton was received at the U.S. Embassy by Joseph A. Mussomeli, who had presented his credentials to become the new U.S. Ambassador on September 22,2005. A highlight of the former President's visit was a tour of the new Embassy facility, which had opened its doors on January 17th, 2006. The new building, located next to the famed Wat Phnom temple on the capital's north side, occupies an entire city block and houses over 500 employees. As the first purpose-built U.S.
Another sign of this deepening engagement was the arrival of the Peace Corps, which opened its first office in Phnom Penh in 2006 at the invitation of the Cambodian government. The Peace Corps swore in its first group of volunteers on April 4, 2007. These 29 volunteers served their two-year tours living with Cambodian families in rural villages throughout the country, teaching English at upper secondary schools and regional teacher training centers. Successive volunteer classes swelled in size as the decade continued.
In 2008, the country was poised for what would be its fourth parliamentary election since UNTAC. On July 27, Cambodians went to the polls and voted for the CPP in large numbers, allowing the party to secure the more than the two-thirds majority necessary to form a government. Regardless, the CPP decided to maintain
its alliance with a severely diminished FUNCINPEC, and Hun Sen remained Prime Minister.
By funding candidate debates, elections observers, and town-hall style political forums, the United States contributed to what international observers called the freest election in Cambodia's history. The vast majority of Cambodia's registered voters were able to express their choice in a peaceful and orderly atmosphere. U.S. programs designed to engage women in the democratic process had a noticeable impact, with women filling 15% of National Assembly seats, reflecting a trend of steady increases over previous elections. In a sign of their growing political prominence, women candidates were selected for a newly created Deputy Prime Minister position and 24 deputy governor positions.
At the start of2009, a new U.S. Ambassador arrived in the country. Carol A. Rodley presented her credentials on January 20, 2009, becoming the first woman to occupy the post. That same year, an event with major political, legal, and symbolic significance occ;urred in a courtroom on the outskirts of Phnom Penh. With Cambodians and the world watching, the Khmer Rouge tribunal began its first case on February 16, 2009. The defendant was Kaing Guek Eav, better  known by his revolutionary name Duch, who was the warden of the notorious Khmer Rouge prison at Tuol Sleng, also known as S-2l. After 30 years of waiting, Cambodian witnesses finally appeared in a court of law to describe the horrors they had endured under the Democratic Kampuchea regime.
Embassy in Cambodia, the new facility was a sign of growing U.S. engagement in the country.of Cambodia's cultural history. A highlight of the deal was the repatriation in 2007 of a sandstone Apsara dancer from the 13th century that had been smuggled into the United States. The bilateral agreement was renewed and expanded in 2008.
រៀបចំ IDS Khmer ម 8:45 AM
Email ThisBlogThis!Share to TwitterShare to FacebookShare to Pinterest