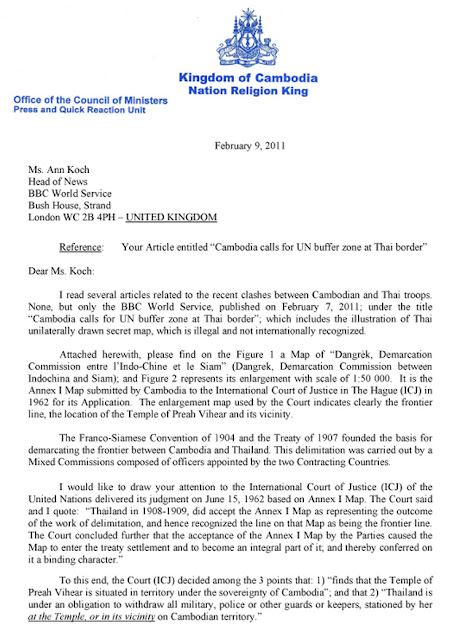 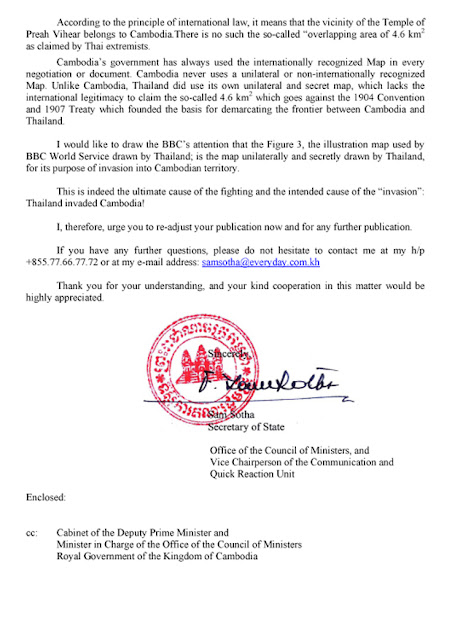 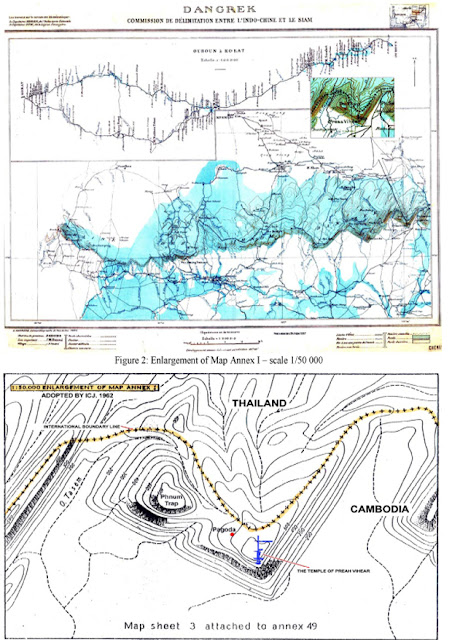 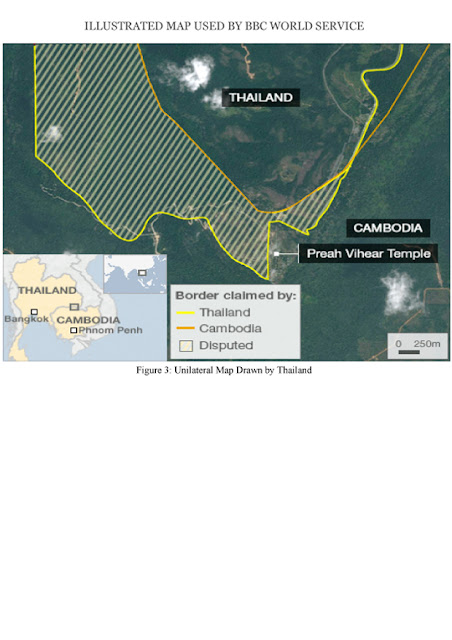 Editorial by Ek Madra
Now, more than ever, the international community must stand up, take heed of the perils facing Cambodia’s Preah Vihear temple at the hands of the Thai army. The international committee has a moral and legal obligation to undertake this intervention as it had jointly decided to inscribe the 900-year old monument as a World Heritage site. The Cambodia’s Temple was listed as World Heritage Site in July 07th 2008 during the World Heritage Council meeting at Quebec, Canada.
Thai forces had staged repeated attacks in and around the vicinity of the world heritage, inflicting irreparable damage to the temple and its surroundings aimed at justifying Bangkok’sinvasion lies in the secret and unilateral map drawn up byThailand, which is unrecognized by the international community.
Despite numerous ceasefire agreements and dialogue, Cambodia’s Preah Vihear temple continues to be the focal target for Thai forces and recalcitrant politicians to divert attention of their people away from their domestic political issues.
Thai armed forces attempts to invade Cambodia and forcibly evict her citizens from its own territory. This is tantamount to a scorched earth policy as Thai army firing has been indiscriminate and deliberate, probably aimed at discouraging the committee from discussing further the development of the Preah Vihear temple and its vicinity in line with the inscription of the said temple to the UNESCO World Heritage list.
Evidently, Thai soldiers had again, on Friday and Saturday last week, launched artillery bombardment deep into Cambodia’s territory at three locations, all of which are within the vicinity of the Temple. Stern preventive measures must be taken now without delay to ensure that Thai troops respect the international cultural heritage status bestowed on the Preah Vihear temple.
The protection and safe guarding of the temple benefits not only Cambodia but also its feuding neighbor Thailand. That is to say Thailand also stands to benefit from a peaceful and safe Preah Vihear temple in all aspects – development of tourism and economic activities as well as people to people exchange.  Thus, it is very important that the international community moves immediately to assist Cambodia to ensure the full and complete preservation of the temple, one which is free from damages caused by armed conflict.
I am deeply shocked again after hearing that the latest Thai attacks had caused many serious damages to the Temple of Preah Vihear as stated by Cambodia’s ministry of foreign affairs.
Based on the Convention for the Protection of Cultural Property in the Event of Armed Conflict, done at the Hague, 14 May 1954, stated that
Article 4. Respect for cultural property
1. The High Contracting Parties undertake to respect cultural property situated within their own territory as well as within the territory of other High Contracting Parties by refraining from any use of the property and its immediate surroundings or of the appliances in use for its protection for purposes which are likely to expose it to destruction or damage in the event of armed convict; and by refraining from any act of hostility directed against such property.
Article 22. Conciliation procedure
1. The Protecting Powers shall lend their good offices in all cases where they may deem it useful in the interests of cultural property, particularly if there is disagreement between the Parties to the conflict as to the application or interpretation of the provisions of the present Convention or the Regulations for its execution.
2. For this purpose, each of the Protecting Powers may, either at the invitation of one Party, of the Director-General of the United Nations Educational, Scientific and Cultural Organization, or on its own initiative, propose to the Parties to the conflict a meeting of their representatives, and in particular of the authorities responsible for the protection of cultural property, if considered appropriate on suitably chosen neutral territory. The Parties to the conflict shall be bound to give effect to the proposals for meeting made to them. The Protecting Powers shall propose for approval by the Parties to the conflict a person belonging to a neutral Power or a person presented by the Director-General of the United Nations Educational, Scientific and Cultural Organization, which person shall be invited to take part in such a meeting in the capacity of Chairman.
Article 23. Assistance of Unesco
1. The High Contracting Parties may call upon the United Nations Educational, Scientific and Cultural Organization for technical assistance in organizing the protection of their cultural property, or in connexion with any other problem arising out of the application of the present Convention or the Regulations for its execution. The Organization shall accord such assistance within the limits fixed by its programme and by its resources.
2. The Organization is authorized to make, on its own initiative, proposals on this matter to the High Contracting Parties.
I, therefore, called on the international community to pay close attention to the current armed clashes provoked by Thais to ensure that the Temple will never ever be damaged again by Thai gunfire.  Thus the UNESCO and World Heritage Committee should call on all concerned parties to set up an ADHOC committee to work with Cambodia and Thailand to make sure that the Temple will no longer be part of the battle ground between the two Asian nations.
រៀបចំ IDS Khmer ម 5:24 PM No comments:
Email ThisBlogThis!Share to TwitterShare to FacebookShare to Pinterest

Tuesday, February 8, 2011
The Director-General of UNESCO, Irina Bokova, today reiterated her call for calm and restraint around the Temple of Preah Vihear, inscribed on the World Heritage List in 2008. A border dispute between Cambodia and Thailand caused several deaths and damage to the site in recent days.
"I intend to send a mission to the area as soon as possible to assess the state of the temple," she said. "World Heritage sites are the heritage of all humanity and the international community has a special responsibility to safeguard them. This requires a collective effort that must be undertaken in a spirit of consultation and dialogue. Heritage should unite people and serve as an instrument of dialogue and mutual understanding and not of conflict."
The Temple of Preah Vihear, dedicated to Shiva, is composed of a series of sanctuaries linked by a system of pavements and staircases over an 800-metre-long axis; it dates back to the first half of the 11th century AD. The site is exceptional for the quality of its carved stone ornamentation and its architecture, adapted to the natural environment and the religious function of the temple.
http://whc.unesco.org/en/news/708
_______________________________________________________
យូណេស្កូនឹងបញ្ជូនបេសកជនមកកាន់ព្រះវិហារ
អគ្គនាយកនៃយូណេស្កូ Irina Bokova នៅថ្ងៃនេះបានបញ្ជាក់ឡើងវិញពីការ អំពាវនាវរបស់លោកស្រីឲ្យមានការស្ងប់ស្ងៀម និងអត់ធ្មត់នៅជុំវិញប្រាសាទព្រះវិហារ ដែលត្រូវបានចុះឈ្មោះក្នុងបញ្ជីបេតិកភណ្ឌពិភពលោក ក្នុងឆ្នាំ២០០៨ ។ ជម្លោះព្រំដែន រវាងកម្ពុជា និងថៃ បណ្តាលឲ្យមានការស្លាប់ និងការខូចខាតជាច្រើនដល់ប្រាសាទ នា ពេលថ្មីៗនេះ ។
លោកស្រីបាននិយាយថា «ខ្ញុំមានបំណងបញ្ជូនបេសកជនទៅកាន់តំបន់នោះឲ្យ បានឆាប់តាមដែលអាចធ្វើទៅបាន ដើម្បីវាយតម្លៃពីស្ថានភាពរបស់ប្រាសាទ» ។ «បេតិក ភណ្ឌពិភពលោក គឺជាបេតិកភណ្ឌរបស់មនុស្សជាតិទាំងអស់ ហើយសហគមន៍អន្តរជាតិ មានកាតព្វកិច្ចពិសេសក្នុងការការពារបេតិកភណ្ឌទាំងអស់នេះ ។ ការការពារនេះ ទាមទារ ឲ្យមានកិច្ចខិតខំប្រឹងប្រែងទាំងអស់គ្នា ដែលត្រូវធ្វើឡើងក្នុងស្មារតីពិគ្រោះយោបល់ និង សន្ទនាគ្នា ។ បេតិកភណ្ឌគូរតែរួបរួមមនុស្សជាតិ​ ហើយបំរើជាឧបករណ៍នៃកិច្ចសន្ទនា និង ការយោគយល់ទៅវិញទៅមក ដែលមិនមែនសម្រាប់ជម្លោះនោះទេ» ។
ប្រាសាទព្រះវិហារ ដែលឧទ្ទិសដល់សាសនាព្រហ្មញ្ញនេះ មានបណ្តុំកន្លែងសក្ការៈ នានាដែលត្រូវបានតភ្ជាប់ដោយប្រព័ន្ធផ្លូវដើរ និងជណ្តើរ ដែលមានអ័ក្សប្រវែងជាង ៨០០ ម៉ែត្រ ។ ប្រាសាទនេះ បានកសាងក្នុងពាក់កណ្តាលដំបូងនៃសតវត្សទី១១ ។ ប្រាសាទនេះ មានលក្ខណៈពិសេសដោយសារតែចម្លាក់ថ្ម និងស្ថាបត្យកម្ម ដែលលក្ខណៈស៊ីគ្នាទៅនឹង បរិស្ថានធម្មជាតិ និងមុខងារសាសនា ។
សេចក្តីសម្រេចនៃគណៈកម្មាធិការបេតិកភណ្ឌពិភពលោកលើប្រាសាទព្រះវិហារ
http://whc.unesco.org/list/1224
08.02.2011
ប្រភព៖ UNESCOPRESS
រៀបចំ IDS Khmer ម 5:21 PM No comments:
Email ThisBlogThis!Share to TwitterShare to FacebookShare to Pinterest

COMMENTARY ; Atiya Achakulwisut is Deputy Editor, Bangkok Post has revealed that Thailand do not deserve to be member of the World Heritage Committee