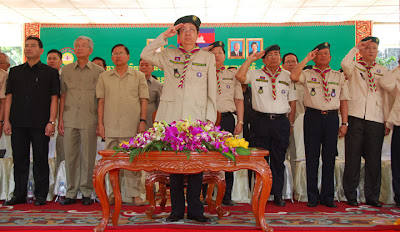 In the morning of 20 December 2010, on the Bayon Temple Premises of Angkor, Siem Reap Province, H.E. Dr. Sok An, Deputy Prime Minister, Minister in Charge of the Office of the Council of Minister,  and Chairman of the National Association of Cambodian Scouts, presided over the Swearing in and Scarf Giving Ceremony.
H.E. Sou Phirin, Governor of Siem Reap Province, said that 5,400 scouts were sworn in and given the scarf. In the future, the scouts will be given additional duties, especially the duty to promote the community's livelihood.
On that auspicious occasion, H.E. Dr. Sok An conveyed the message of Samdech Akka Moha Sena Padei Techo Hun Sen, Prime Minister of the Kingdom of Cambodia, to all the scout members of Siem Reap Province. H.E. Dr. Sok An extended his high appreciation to all the scout youths who have actively participated in the scout movement and this was also extended to their parents and teachers who encouraged them to participate in various trainings and becoming the national scout of Cambodia.  H.E. Dr. Sok An also stressed that the event was in response to the contents of the political platform of the Royal Government of Cambodia under the wise leadership of Samdech Akka Moha Sena Padei Techo Hun Sen, which stated that "to promote the scouts as effective means for education and mental, spiritual and intellectual training as well as physical development " for the good cause of " the production of youths with knowledge, high morale and good citizens bestowed  with responsibility to others and the society". 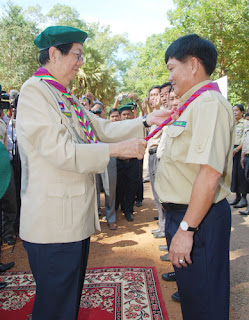 With great success, under the guideline of the Royal Government of Cambodia, H.E. Dr. Sok An extended his respects and deepest thanks to Samdech Akka Moha Sena Padei Techo Hun Sen for supporting the activities for the development of human resources in children and youths aimed at producing qualified human resources who will be the foundation for sustainable development of the nation.
រៀបចំ IDS Khmer ម 2:51 PM No comments:
Email ThisBlogThis!Share to TwitterShare to FacebookShare to Pinterest 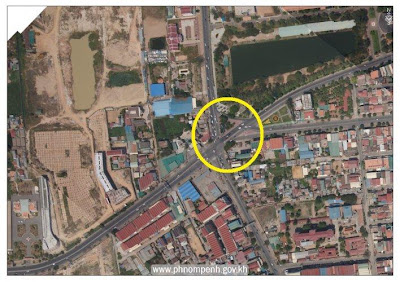 Road 598) is planned to be built very soon. After several meetings with OCIC, the development company of Koh Pich Center and the contractor for Kbal Thnol flyover, Phnom Penh Capital Hall decided to propose to the Royal Governor for the construction of this 2nd flyover with 345m length, 15.2m width, and 5.50m height; it will cost about 8.7million USD. This flyover will play very significant role in facilitating heavy traffic at this intersection. It is noticeably that Phnom Penh cooperated with JICA experts have tried very hard to solve the traffic congestion at this point; however, it still does not work well yet. It will take at least 15 months to construct this new flyover to be ready for the next coming ASEAN Summit 2012. 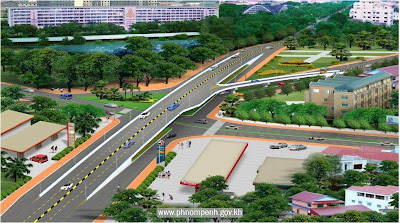 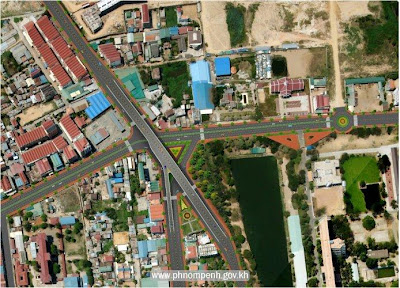