The 1960s would be a tumultuous decade in Indochina, with the deepening
its involvement in and the civil war in intensifying. policies and positions were defined largely by the Cold War, which meant, in regional terms, that containing Chinese influence and securing victory against the North Vietnamese were key priorities.
The had allied itself with the anti-Communist governments of and , and hoped to playa role in improving relations between and its neighbors to the east and west. Prince and Head of State Norodom Sihanouk, though, remained firmly committed to maintaining 's neutrality, with a primary objective of avoiding entanglement in the war in . The Prince also feared the consequences of a unified for his country.
Determined to uphold Cambodia's territorial integrity and suspicious of Thai and South Vietnamese intentions, Sihanouk continued to cultivate ties with superpowers on both ends of the ideological spectrum, despite the fact that by now the United States supported a third of the country's military budget. The Prince made it clear that he would prioritize Cambodian interests and national identity over all other agendas.
From the U.S. point of view, this was acceptable as long as the Cambodian government did indeed remain neutral and did not officially side with the Chinese; Sihanouk's crackdown on leftists in Cambodia-or, as he called them, the Khmer Rouge-was reassuring to the United States. Though there was some opposition to his government, during much of the decade Sihanouk was a popular leader who was fully backed by the military.
Decades later, commenting on Sihanouk's shifting attitudes toward the , C. Robert Moore, the Deputy Chief of in from 1959 to 1962, said: "It was a colorful regime. One had to get used to daily changes in the attitude of the Prince towards us, because he was convinced that there were two American policies. One was that of the Embassy and the other was that of the CIA.

Bilateral relations during the first part of the decade were largely positive, with assistance peaking at roughly $20 million per year. Ties improved further with President John F. Kennedy, who agreed to send four T-37 jet-trainer planes to early in his presidency, a request that Prince Sihanouk had registered under the Eisenhower Administration. In the fall of 1961, while Sihanouk attended a meeting of the United Nations General Assembly in , President Kennedy invited him to the White House. During the 90-minute meeting, the leaders discussed current affairs in Southeast Asia, focusing on problems in and . Sihanouk felt there had been a "complete exchange of views" and that the talk had been "very satisfactory, "according to an article about the meeting in The New York Times. 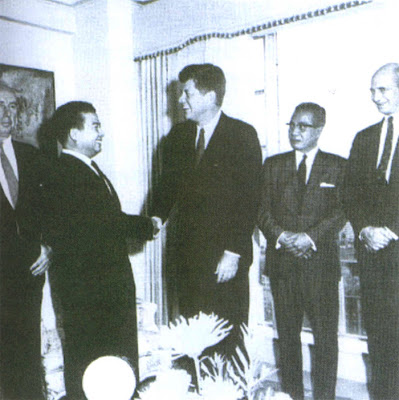 (From left to nght) Amhassador to the U.N.,
Adlai Stevenson. Prince Norodom Sihanouk. President John F. Kennedy. Nhiek Tioulong, Cambodian Foriegn Minister; and .John M. Steeve. U.S. Assistant Secretary of State for Far Eastern Affairs
Unnerved by the state of affairs in , where the Pathet Lao Communists were gaining the upper hand and the North Vietnamese were sending soldiers and supplies southward along what would become known as the Ho Chi Minh Trail, Prince Sihanouk called for a conference that he hoped would resolve the situation. The Prince feared for 's independence, stability, and territorial integrity, should Laos succumb to the communists. The , along with 14 other nations including , the Soviet Union, , and , attended the talks in 1961. A year later, the negotiations led to accords that called for a peaceful, neutral, independent, and democratic . By that point, however, little could be done to turn the nation back towards democracy.
Temperatures rose even higher with the escalation in early 1962 of the conflict in . Concerned about hostilities spilling over into its borders, sought to increase its armed forces by 10 %. Sihanouk turned to the for additional assistance, hoping that Cambodian forces would be able to stop the Viet Cong from infiltrating Cambodian land. The supported this expansion of the Cambodian military.
As the fighting in worsened, attacks on Cambodian vi llages became increasingly common. The South Vietnamese justified these incursions as missions to target Viet Cong troops, which were believed to be hiding out across the border.
The dispute between and over the hear served as another source of regional tension. The 11 th-century architectural masterpiece was located on disputed territory along the Thai-Cambodian border, which the Thais had controlled since 1954. The case was heard in 1962 at the International Court of Justice in , with Dean Acheson, former Secretary of State during the Truman Administration, representing the Cambodian side.
Though it was widely believed that would win the case, the court decided in favor of . Prince Sihanouk proclaimed a seven-day national holiday and the country erupted into mass celebration. The Thais refused to accept the ruling and boycotted international meetings. The did its part to defuse the situation. The crisis became one of the first issues that the newly appointed U.S. Ambassador to , Philip D. Sprouse, would manage. Ambassador Sprouse presented his credentials in August 1962.
The Preah Vihear victory was one of many sources of national pride to emerge in 1960s ; others included prolific creativity in the areas of film, music, and architecture. Artists like Sinn Sisamouth and Ros Serey Sothea,singers who forged an unforgettable blend of Khmer sounds with rock on' roll, and Van Molyvann, the father of the modernist New Khmer Architecture style, helped make Phnom Penh one of Southeast Asia's most attractive, culturally rich capitals.
By this time, the stance towards had become divided into two camps: those who believed Sihanouk was aligning himself with the Communists and those who felt it was in the interest not to isolate . A vocal proponent of the latter perspective was Senator Mike Mansfield, who visited in late 1962 along with three other senators. An expert who would later become the longest serving U.S. Ambassador to Japan, Senator Mansfield personally advised Presidents Kennedy, Johnson, and Nixon during the 1960s and 1970s on military involvement in the Vietnam War, which he opposed. 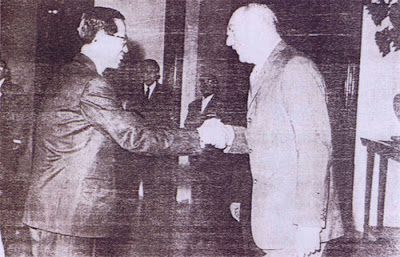 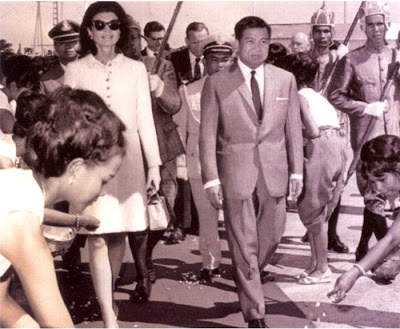 ﻿
Jacqueline Kennedy with Prince Norodom Sihanouk at her arrival in . 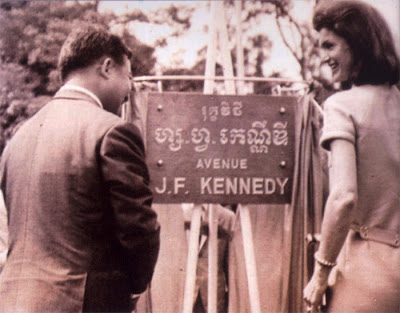 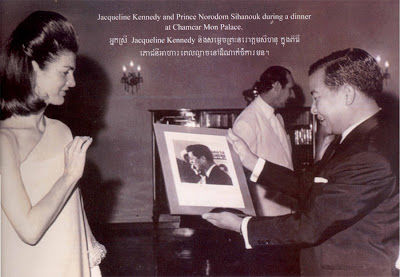 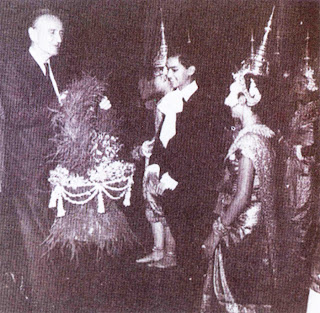 Montana Senator Mike Mansfield offers a bouquet of flower to Princes Bopha Devi and Prince Sihamoni.
The Senator and his wife visited in 1969.
រៀបចំ IDS Khmer ម 8:45 AM
Email ThisBlogThis!Share to TwitterShare to FacebookShare to Pinterest