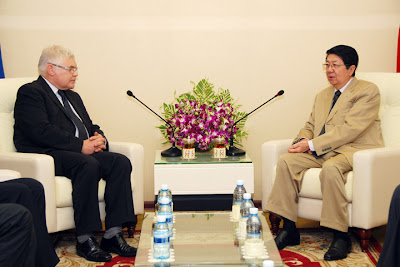 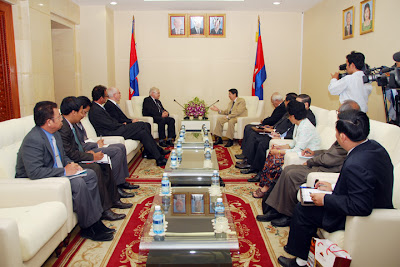 Atiya Achakulwisut is Deputy Editor, Bangkok Post.
·         Published: 1/02/2011 at 12:00 AM
·         Newspaper section: News
I know what the People's Alliance for Democracy and ultra-nationalist types think: it is better to lose lives or to take some than to lose a single square inch of Thai territory.
What I do not know is if this "not a single square inch" refrain is a sensible thing to subscribe to, considering the present reality. Border demarcation is never an emotional issue to be dabbled in with passion. In the past - in some places currently still - defining one's territory had to do with one's military might. In short, the border could be changed only by means of war.
Look at the map of Thailand during the reign of King Rama I, King Rama IV or King Rama V. They did not look the same during these different periods. And they certainly did not look like the present-day axe-shaped one we are familiar with.
In modern times, border demarcation or territorial disputes are settled at the negotiating table. There, technical details, treaties and agreements are put forward by each side and they thrash out the differences, point by point. It is hardly a speedy process but it is probably the only one that is internationally acceptable at the moment.
So, while the PAD has the right to make public its opinions, which apparently are different from those upheld by the government, I do not think it is healthy for the group to keep belching out the war cry and selectively use the ultra-nationalistic slogan of "not a single square inch" without considering the reality on the ground, or the reality as seen by other parties.
I said "selectively" because I do not see the PAD or its extremist arm, the Thai Patriots Network, raising a voice over the secessionist movement in the deep South. What about that?
A group of people have proclaimed they want to carve out the three southernmost provinces of Thailand and establish a separate Muslim state. That is a much larger piece of Thailand than the 4.6 sqkm so-called overlapping areas between Thailand and Cambodia that the PAD is harping on about. Why do the yellow shirts only care about the northeastern frontier and not the southern one? Is the deep South not our land?
A little disclaimer is due here. I only raise the issue of the deep South to illustrate the PAD's selective use of its "not a single square inch" war cry. Whether or not the far South should be separated is an entirely different issue which must be explored in another context.
Besides the inconsistent use of its rhetoric in the present context, if we look into the past, we will also see that the PAD's stringent stance and "ultimatum" style of politics is a sharp contrast to the "bending with the wind" diplomacy that Thailand, or Siam, has championed for centuries and which has been acknowledged as an astute move that allowed the country to escape being colonised during the height of imperialism in the 19th century. In fact, it was King Rama V who coined and popularised the sentiment of "losing small parts of the land to preserve the whole country" when the country had to give up an area of 143,800 sqkm (in present-day Laos) along the eastern bank of the Mekong River to France in 1893. Also, in 1903, Thailand agreed to give Luang Prabang and Champassak in Laos (62,500 sqkm) to France in exchange for the province of Chanthaburi which France had earlier seized. In a familiar pattern, the kingdom had to surrender Battambang, Siem Reap and Sisophon - a combined area of 51,000 sqkm - to France in exchange for the city of Trat.
Altogether, during the period from 1786 to 1962, the country lost part of its territory 14 times - the last one being the right over the temple of Preah Vihear as decided by the International Court of Justice. The point is, we still stand as a country despite these losses.
It's true that the "bending with the wind" diplomacy was mapped out a century ago in response to the formidable power of colonialism. But who knows if Thailand's position in the present-day globalised world is not so different from the one Siam was caught in a century ago?I know that the PAD would rather go to war than lose a single inch of the 4.6 sqkm area under dispute. I do not believe it is a realistic option for Thailand.
រៀបចំ IDS Khmer ម 10:51 AM No comments:
Email ThisBlogThis!Share to TwitterShare to FacebookShare to Pinterest

OPINION: Thailand’s selective reading of the Franco-Siamese Treaty of 1904

I took quite sometimes until Thailand feels comfortable enough to utter the expression “Franco-Siamese Treaties of 1904 and 1907”. It kept on wishing that those treaties disappear in thin air. But that is not possible. Yet Thailand manages to read them selectively, leaving out things that are politically undesirable, but legally inescapable.
In making reference to the Franco-Siamese Treaty of 13 February 1904 (or the 13 February 1904 Convention), Thailand has implicitly omitted part of the provisions in Article III by saying that “Thailand did not accept the France-made 1:200,000-scale map to determine the boundary line,” as written by Supalak Gunjanakhundee in his opinion piece in the NATION on 1 February 2011 under the title: “Thailand Takes stand on Cambodia.” By “Thailand,” Supalak Gunjanakhundee refers to Abhisit Vejjajiva.
First of all, it gives the impression that in Thailand, anything is legal when it is politically desirable. This theory works in Thailand. But in an environment where politics have no reasons to be there, and where the application of the rule of law is king, Thailand knew for sure that there is no way out, but to capitulate. I am talking about Thailand’s experiences at the International Court of Justice (ICJ) in 1962 when Thailand tried in vain to convince the judges at the ICJ that Article 1 of the 1904 Treaty is the only essential and important part of the Treaty, as every other thing that is written in the Treaty should not be considered by the ICJ. Has Thailand succeeded, the 15 June 1962 Judgments would have been different.
When Supalak Ganjanakhundee wrote that “Thailand did not accept the France-made 1:200,000 scale map to determine the boundary line,” he meant to say that Abhisit Vejjajiva  does not recognize the 1904 Franco-Siamese Treaty, or does selectively recognize part of it, or selectively omit the parts on the delimitation of the frontiers between the Kingdom of Siam and the territories making up the French Indochina, to be carried out by Mixed Commissions comprised of officers appointed by the two contracting parties, and the end result of the Mixed Commissions tasks was the production of the 1:200,000 scale Dangrek map, also known as ANNEX I map at the ICJ in 1962 and other maps. It was the convoluted way to say that Abhisit Vejjajiva does not recognize the international frontier line that has existed almost a century ago by invoking all possible nonsense of their speculative use of words, such as “French map” instead of international map, “old map” instead of international and binding map. How Abhisit Vejjajiva  and  Thailand have tried to manipulate the reading of the 1904 Treaty has remained the single political tool still viable in Thailand to take Cambodia hostage of Thailand internal political squabbles.
Abhisit Vejjajiva and Thailand with him cannot pretend to recognize the 1904 Franco-Siamese Treaty, without recognizing the 1:200,000-scale Dangrek map and the international frontier line on this internationally recognized map. If it is for domestic political consumption only, Abhisit Vejjajiva and Thailand can say all the nonsense they wish to say, but they must be careful not to project their traditional innate arrogance against Cambodia, that blinds Abhisit Vejjajiva and Thailand to the point of becoming the laughing stock of the international public opinion.
It is advisable that in terms of good neighborly relation between Thailand and Cambodia, Abhisit Vejjajeva and Thailand altogether must read and apply international agreement, in this particular case the 13 February 1904 Franco-Siamese Treaty in its entirety, and with all sincerity and wisdom as a Prime Minister of a civilized nation in the 21st century. Regardless of the arrogance, aggressiveness and offensive language by Thailand, Samdech Akka Moha Sena Padei Techo Hun Sen Prime Minister of the Kingdom of Cambodia has never lost sight of his dream and wisdom to build peace with neighbors and with all countries in the region and the world, and to develop the border area to be a peaceful and prosperous region for Cambodian and Thai people.
Waddhana P
Senior Analyst and Researcher on
Cambodian-Thai Relations
Institute for International Affairs, Cambodia
3 February 2011
រៀបចំ IDS Khmer ម 9:53 AM No comments:
Email ThisBlogThis!Share to TwitterShare to FacebookShare to Pinterest 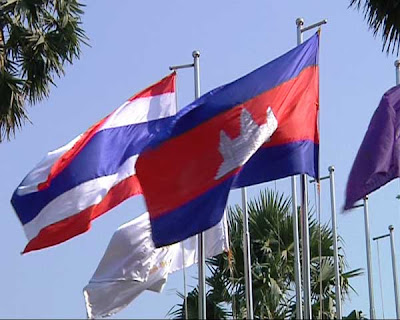 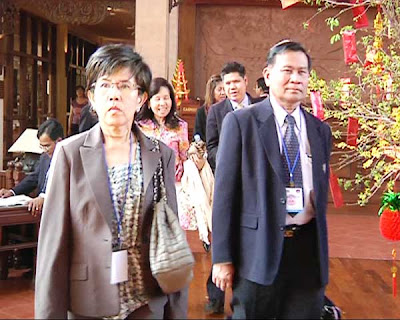 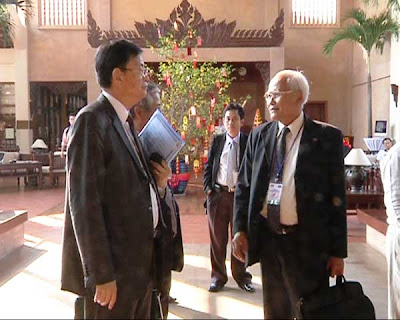 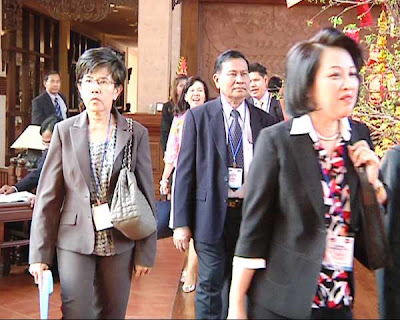 រៀបចំ IDS Khmer ម 8:24 AM No comments:
Email ThisBlogThis!Share to TwitterShare to FacebookShare to Pinterest