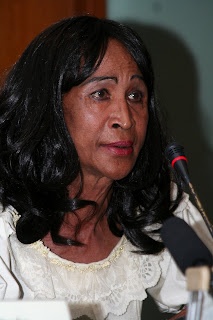 PHNOM PENH, Sept. 3 KYODO
A Cambodian transgender woman on Wednesday lodged a complaint with the U.N.-backed Khmer Rouge genocide tribunal alleging she was a victim of gender-based crimes during the country's Khmer Rouge regime.
Sou Sotheavy, 68, said at a press conference that she was persecuted for being a transgender and was raped by Khmer Rouge officials and soldiers during the 1975-1979 regime. Sotheavy said she was punished for having committed ''moral offences'' and for behaving as a woman and placed several times in re-education camps as well as in prisons.
''I was raped by Khmer Rouge prison chiefs and other soldiers and forced into an arranged marriage with a woman whom I had only 10 days with,'' she said. Her lawyer, Silke Stuzinsky, said the application of Sotheavy's complaint was submitted to the Extraordinary Chambers in the Courts of Cambodia on Wednesday and hoped that her client's case will be processed by the court. Sou Sotheavy is now the director of a local nongovernmental organization, CNMWD, which fights for the rights of sex workers and sexual minorities.
Sou Sotheavy's action is the first complaint before the ECCC concerning sexual violence under the Khmer Rouge regime. In her complaint, she said she is not seeking compensation but to tell her story to the world on how sexual violence was committed during the Khmer Rouge era. ''I am representing many transgenders who suffered like me during the period, but most of them were already killed or died,'' she said.
The ECCC said that, to date, investigations into sexual violence have not been included for the reason that there is a lack of sufficient evidence. But Sotheavy's complaint will be a step that would encourage other victims of such crimes to come forward and demand acknowledgment and justice for their suffering, which has largely been ignored until now.
''I hope my case will help more victims of sexual violence to speak out and can also help transgenders, other sexual minorities and sex workers in other countries to speak out for their rights and to have serious crimes committed against us recognized by international courts,'' she said. The ECCC was established to bring former senior Khmer Rouge leaders and those responsible for crimes committed in late 1970s.
KyodoSeptember 03, 2008
រៀបចំ IDS Khmer ម 10:58 AM No comments:
Email ThisBlogThis!Share to TwitterShare to FacebookShare to Pinterest

PHNOM PENH , Sept. 3 KYODO
Cambodia 's population has increased by nearly 2 million over the past decade to reach 13.4 million, according to the government's provisional census data released Wednesday.

The country's annual population growth rate during the last decade averaged 1.54 percent, higher than the average growth rate of 1.3 percent for Southeast Asia as a whole. Population density during the same period increased from 64 to 75 people per square kilometer, significantly lower than the current average of 126 for Southeast Asia as a whole.
KyodoSeptember 03, 2008
រៀបចំ IDS Khmer ម 10:58 AM No comments:
Email ThisBlogThis!Share to TwitterShare to FacebookShare to Pinterest
Newer Posts Older Posts Home
Subscribe to: Posts (Atom)