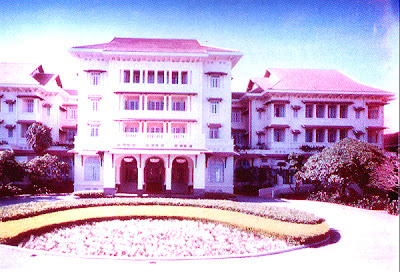 The US Legation opened in on November 14.
Operations were initially conducted from the renowned Hotel Le Royal.

Though the had established consular offices in neighboring in the late 1800s, there was no official U.S.presence in until 1950. Contact between the and in the 19th and early 20th centuries was limited to that of missionaries, adventurers, big-game hunters and scientists, with some accounts-like Frank Vincent Jr.'s book, The Land of the White Elephant, which chronicles his journey from to the temples of Angkor Wat by boat in the 1870s­capturing the American imagination. With the export of goods including kerosene, timber, rice, and flour into French Indochina (of which had been a part since 1887), the had also formed some early regional economic ties.
The post-World War II era saw a distinct shift in relations between the two countries, with Mao Zedong's rmies nearing victory in and the nationalist, anti-colonialist Viet Minh forces gaining against the French in northern . As foreign policy increasingly focused on preventing the spread of Communism in Southeast Asia, friendly ties be­tween the United of Communism in Southeast Asia, friendly ties be­tween the and took on a new importance.
Cambodia, along with and , had comprised French Indochina since the late 19th century; during World War II, much of the territory was occupied by Vichy-backed Japanese troops. The French resumed control after 1945, but by then the Khmers had become anxious for their independence. On February 7, 1950, the French Assembly granted the three Indochinese countries autonomy within the French Union; shortly thereafter, the recognized the new Cambodian government, with the young
King Norodom Sihanouk as its head. By May, President Harry Truman approved $20 million in economic and military aid to , an amount that would increase significantly over the decade.
The established its first direct diplomatic relationship with on June 29, 1950, with the appointment of Donald R. Heath as Envoy Extraordinary and Minister Plenipotentiary. Heath presented his credentials to King Sihanouk on July 11, 1950. The US Legation opened in on November 14. Operations were initially conducted from the renowned Hotel Le Royal until a Legation office and U.S. Information Service library were established in a new location. The Legation was raised to Embassy status on June 25, 1952, at which point Heath became the first U.S.Ambassador to . 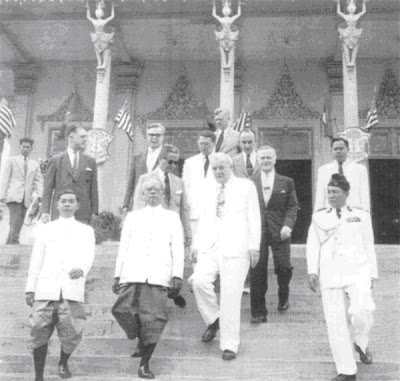 Secretary of State John Foster Dulles visited the in February 1955.
Simultaneously, the entered into a mutual defense assistance agreement with , , and , which included $7.8 million in economic and military assistance to be distributed over four years. , 's first minister to the , on his first visit to , expressed 's "deep gratitude" for assistance during his meeting with President Truman. (As a further gesture of appreciation, King Sihanouk sent the President a rare white elephant. The first U.S. Charge d' Affaires to , Don V. Catlett, is most remembered for managing the daunting' task of shipping the animal to .)
After intense negotiations between King Sihanouk and the French government-with the often acting as mediator­Cambodia declared its full independence on November 9, 1953. But it would not be until the Geneva Conference the next year that the French would fully cede authority. Throughout the talks, the actively supported 's bid for autonomy.
Shortly after the Geneva Accords, Robert McClintock became Ambassador to , presenting his credentials to the King on October 2, 1954. The Embassy continued to grow, relocating to a larger space to accommodate its expanding staff.
With the King taking the lead, the now fully independent country of was staunchly committed to maintaining its neutrality, and Sihanouk cultivated friendships with both western and communist powers. In light of Ho Chi Minh's communist government in North
Vietnam and fear that 's armed forces were ill equipped to handle a possible communist insurgency, the began working with the Cambodian government to expand military assistance in the country. Details of a military training program, which included the establishment of a Military Assistance Advisory Group (MAAG), were worked out by Ambassador McClintock and Assistant Secretary of State Walter S. Robinson, with Secretary of State John Foster Dulles visiting Phnom Penh (the highest level official visit at the time) in February 1955 to meet with King Sihanouk and discuss the plan. The military defense agreement was signed in May. Simultaneously, Ambassador McClintock focused efforts on securing the gradual withdrawal of French troops from .
Bilateral relations between the two countries received another significant boost with the establishment in 1955 of a $50-million-per-year assistance program, which sought to promote economic and social progress; strengthen indepedence; Improve and expand free public education; increase the quantity and quality of agricultural yields; Improve public health, security, and infrastruc­ture; and modernize the armed forces. The aid program was larger in size and scope than the combined support from all other countries and international organiztions, with the providing $493 million in assistance by 1963. 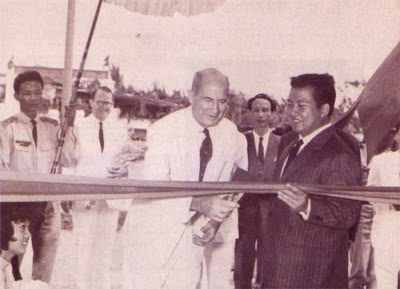 American Ambassador William Trimble, with Cambodian Head of State Prince Norodom Sihanouk, cuts the ribbon at the inauguration ceremonies of the model elementary school at Stung Treng, one of fourteen built in various provinces by American Aid.
assistance trained teachers and helped build and equip elementary, secondary, and specialist schools across many fields. funding established the country's first in Kampong Kantuot, as well as 14 elementary schools and five secondary school buildings. Several Cambodian students were also sent to the on scholarships to study agriculture, public health, industrial arts, and engineerIng.
Other projects included the construction of health centers, pediatric facilities, and a police academy, along with extensive expansion and improvement of 's infrastructure, which included the repair of 800 miles of roads and 43 bridges. A highlight of these efforts was the Khmer­-American Friendship Highway, a 140-mile-Iong road that would link with the newly  built port at Sihanoukville, along 's coast. The $25-million construction was the largest single cooperative aid project, with American and Cambodian laborers working side-by-side

Meanwhile, changes were taking place on the Cambodian political scene. In March 1955, King Sihanouk abdicated the throne to form the Sangkum political party and stand for election later that year. The Prince, as he was now known, handily won the September election and took the post of Prime Minister.

In October] 956, Ambassador McClintock completed his tour and Carl W. Strom was appointed as the next U.S. Ambassador. He presented his credentials to the Prince on December 7, 1956 and remained in the post until March 1959. One of Ambassador Strom's key positions was to protect 's sovereignty in the face of increasing aggression from Thai and Vietnamese forces, with which had a long history of border skirmishes.
Though ties were strengthening between the and , Sihanouk's position of neutrality began to complicate the relationship. The Prince had repeatedly extended a friendly hand to the People's Republic of , visiting it and other Communist countries in 1957, during which he secured economic aid. To exacerbate matters-and amid rising tensions with the pro-western governments of Thailand and South Vietnam-Prince Sihanouk recognized the People's Republic of China in July 1958, despite American rejections. Ambassador Strom was temporarily recalled, but Prince Sihanouk, facing an increasingly unstable environment at home, sought to repair relations and accepted an invitation to visit the . His itinerary would include stops in , , , , , and . Upon arriving at in September, the Prince told the press:
"We haven't forgotten that the was one of the first nations to recognize our country and provide it with sympathy and aid. Since our first steps of independence, we have taken some rather significant steps forward ... this progress was facilitated by your constant friendship and generous aid. If can surmount the immense difficulties that shadow the dawn of its independence, it is due, in large part, to the . The Khmer people know this and will not forget it."
The Prince's visit caused quite a stir in diplomatic circles, particularly following the Cambodian-themed parties he organized in New York and Washington that included a traditional Khmer dance recital given by Princess Bopha Devi, Prince Chakrapong and dancers from the Royal Cambodian Ballet. 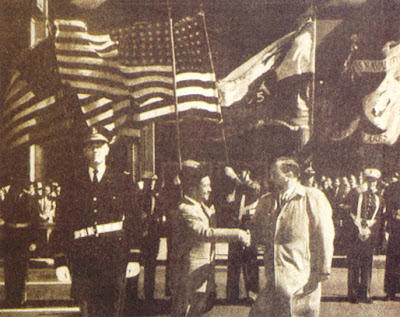 Mr. Richard Daley, Mayor of Chicago, welcomes Prince Norodom Sihanouk. (1958)
The Washington Post and Times-Herald called him "the most fabulous party-giver to date", adding that guests "raved over the decor (a Cambodian garden), the dancers and the glittery costumes."
In , as an "appreciation for all the aid your country has given mine," Prince Sihanouk presented President Eisenhower with a 12th-century solid granite Angkorean Buddha, which still stands in the National Gallery today. Sihanouk was also received by Secretary Dulles, to whom the Prince reiterated his commitment to maintaining 's neutrality. Dulles reaffirmed commitment to 's total independence. 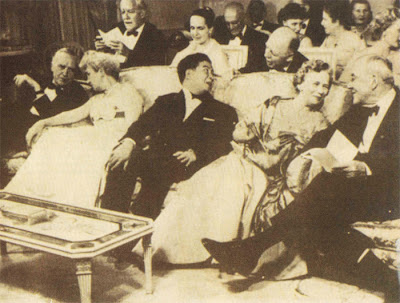 Prince Norodom Sihanouk hosts a dinner to honor Secretary of State John Foster Dulles and his wife at the Cambodian Embassy. (1958)
The visit was a highpoint in bilateral relations during the 1950s, with Ambassador Strom commenting, "I was very happy when I learned that the Prince would travel to better know the and the American people. I know that the visits with President Eisenhower and Secretary Dulles were very productive. I hope that they will allow more Cambodians to acquire a better understanding of the . I am certain that a better mutual knowledge cannot but reassure our friendly relations." 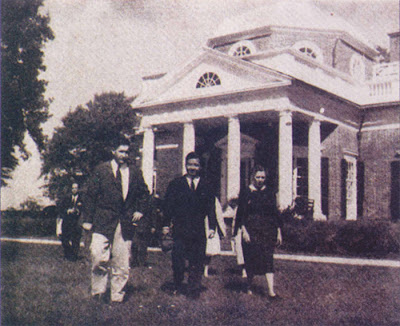 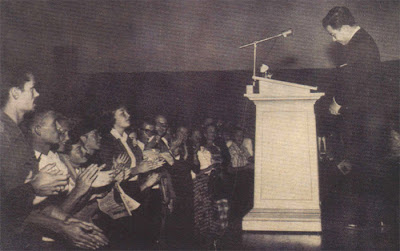 Prince Norodom Sihanouk addresses American students in .
The decade would close on a high note: On April 23, 1959, William C. Trimble presented his credentials to the Prince; he would become one of the most successful early Ambassadors to . Plans were also initiated to build the first official Embassy building. In July, Secretary of the Interior Fred A. Seaton traveled to to inaugurate the recently completed Khmer-American Friendship Highway.
The road, now known as National Road 4, is to this day viewed as a symbol of the friendship between the and Cambodian governments. Markers at either end of the road bear the following words from Prince Sihanouk and President Eisenhower: 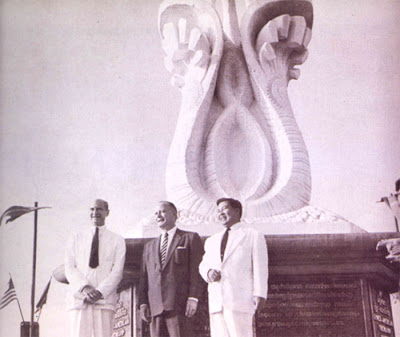 Prince , Secretary of Interior Fred Seaton, and Ambassador Trimble inaugurated the - . Cambodian Friendship road linking with Sihanoukville on July 22, 1959.
"This is a highway of friendship, built through the cooperative efforts of Americans and Khmers who have worked in a spirit of liberty and fraternity toward the goal of economic independence of this country." - Prince Sihanouk
"This highway, built by joint efforts of Cambodian and the , is the symbol of the friendship of the peoples of our two countries, and of our mutual desire for a free, independent prosperous ." - President Eisenhower
Speaking in 1961 and looking back on a decade of cooperation, Ambassador Trimble said, "It was a decade of remarkable achievement. ... In these 10 years, this ancient yet modem nation has been laying the foundations essential for continued progress and prosperity. The Cambodian people are vigorously engaged in strengthening and extending these foundations, in an atmosphere of liberty and security."
រៀបចំ IDS Khmer ម 12:59 PM
Email ThisBlogThis!Share to TwitterShare to FacebookShare to Pinterest