International News 24/7 (France 24)
Hundreds were killed in the Cambodian capital of Phnom Penh on Monday, as a deadly stampede during a concert on the Koh Pich island put a tragic end to a three-day water festival. 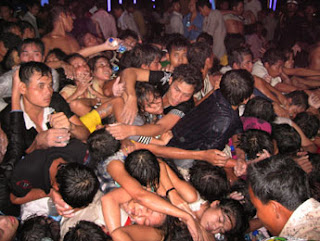 A stampede during an annual water festival in the Cambodian capital Phnom Penh on Monday evening left at least 339 people dead and as many wounded, state television reported, with officials warning that the death toll was likely to rise.
The panic started on Koh Pich - Diamond Island - a long spit of land in the river where a concert was being held. Soft drink vendor So Cheata told reporters the trouble began when about 10 people fell unconscious in the press of the crowd. She said that set off a panic, which then turned into a stampede, with many people caught underfoot.
Government spokesman Khieu Kanharith said it was not immediately clear what triggered the stampede, but a rumour had spread among the revellers that the large bridge linking the island to the mainland was unstable.
"We were crossing the bridge to Diamond Island when people started pushing from the other side. There was lots of screaming and panic," 23-year-old Kruon Hay told AFP at the scene.
"People started running and were falling over each other. I fell too. I only survived because other people pulled me up. Many people jumped in the water," he said.
Hundreds of hurt people lay on the ground afterward. 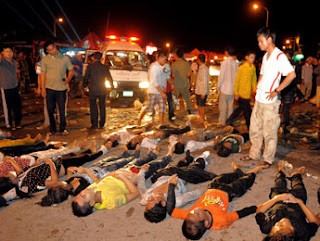 “An hour after it happened there were about 30 bodies left on the bridge,” GRN correspondent Robert Carmichael told FRANCE 24 by phone from Phnom Penh. “All the dead and injured were taken in fleets of ambulances and private cars to five of the hospitals around Phnom Penh.”"This is the biggest tragedy since the Pol Pot regime," Prime Minister Hun Sen declared in a live television broadcast, referring to the Khmer Rouge's late leader. Hun Sen also said a committee would be set up to investigate the incident. 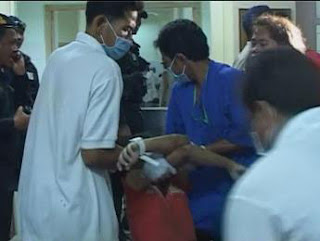 Journalists had difficulty reaching the scene after police set up a series of security cordons.
The annual festival, one of Cambodia's largest and most exuberant, marks the reversal of the flow between the Tonle Sap and Mekong rivers.
Freelance journalist Anne-Laure Poret said the festival is known as a lively event, where families gathered and young people attended concerts on Koh Pich. “It’s the equivalent of New Year’s for the French,” she said by phone from the Cambodian capital.
Authorities had estimated that upward of two million people would descend on Phnom Penh for the annual festival, whose main attraction is traditional boat races along the Tonle Sap river. Monday night marked the end of the holiday.
“It does mark a sad end to the annual water festival,” said Carmichael. “A lot of people come to Phnom Penh from the countryside for the three-day festival, and many won’t be coming back.” 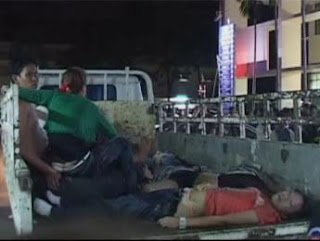